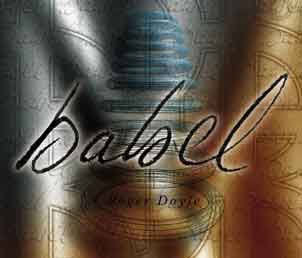 My favourite discovery of 2003, Roger Doyle’s epic Babel 5Cd set is a veritable treasure trove of abstract, complex electronic mayhem. A huge concept work recorded over 10 years in many locations using over 45 separate collaborators Babel is a soundtrack to a conceptual tower of Babel where music acts as a language and terror lurks around every corner. There are many ways of looking at this work, and just as many influences. Nurse with wounds more electronic cut up work is a good example but Doyle works on a much more processed and alien level. There are three Cds soundtracking the various rooms of the tower and a further two Cds of the towers in house radio station. KBBL.

The first CD is Temple music, this is my least favourite of disks although it’s still fantastic, just for me not as good as the others. Pagoda Charm kicks things off with a electronic symphony of processing, guitar and saxophone. Very pleasant sounding, kind of an oriental feel to this track. After about 8 minutes the track begins to fall apart with sound samples and cut-ups entering the mix, while the music fades into the background. There’s a lot of this sort of thing, just when you get your head around a track it explodes into an electronic cut-up mangle that completely throws you off. The next track Mansard is one of the shortest tracks in the set, but for me is one of the most evocative. A gorgeous concrete piano mix, melancholic to the extreme, and a lovely change from the often claustrophobic atmosphere.

The next two tracks I find a little bit dull. Yunnus consists mostly of a very discordant French horn solo and not much else. Earth to earth is a slow symphony of bassoon, flute, violin and electronics. All processed and cut-up, but still a little too disjoined to be engaging. Cantilena is an example of one of Babels central themes, musical language. Here bits of tracks from the morning show on KBBL (featured on the first KBBL disk) are exploded and rearranged in a crazed cut-up method. It’s an interesting way of looking at things but after a while it just sounds like the CD player is broken. Kalu rehearsals is very much like Yunnus as it represents someone practicing in a room of the tower. Mercedes spring is a rather cartoonish sounding piece with metallic percussion and tape, manipulations aplenty. This is the sort of track that really does remind me of NWW. This one sounds a lot like Astral dustbin dirge. The final track of Temple music is the Iron language alphabet. It begins with a trumpet solo, while a very oppressive drone swirls around like a gathering storm. Basically this track takes small clips of the other songs of the set and turns them into distorted drones and glitches to make a huge wall of noise and tape manipulations.

The next disk is chambers and spirit levels. This for me is where Babel comes to life. The first track Entry level is a huge mass of sounds from the previous tracks acting like a warp through the towers many levels. The first main track is Mr Brady’s Room. This is a very disturbing sounding soundtrack to this particular room, with deep ominous drones and distant music in the background. There are sounds from the proposed environment and the whole thing is designed to put the listener into that room. At one point there is a woman calling out then her words are repeated by a computer. There may be some birds in the room too. There are lots of strange metallic sweeps and sounds that give this like most of the tracks a very abstract alien sound. An interesting touch is that you can here the tower radio station in the background playing the music that you will later hear on the radio station disks. Clever stuff. Squat, the next track is even more sparse. Here there are lots of distant voices and instruments and it appears as though someone has been locked out of the apartment. You can hear them trying to get in and banging on the door.

Now we come to one of standout tracks on the whole set. The room of rhetoric. It’s nearly twenty minutes long and takes you on a quite bizarre journey through a series of rooms. It’s very noisy and industrial sounding to start off with, pulsing drones, clanking beams and bells. It’s a very obscure environment. There are many different uses of voice cut-ups and snippets of sound that dart around. At one point you enter a room with a skitting computer voice which sounds a lot like the old Macintosh voice. It’s calls out various random and abstract sentences which are cut-up in various places. Close to the end the noise gives way to reveal a room playing a TV program sounding like a child’s play program or educational video. The vastness and depth to the sound is remarkable throughout and really does take you to another world. The next track is Spirit levels, an award winning piece of madcap processed electronic noise and acoustic recordings including some more cut-up recordings in the mix. The final two tracks are very much like tracks two and three with an emphasis on creating a fictional environment, this time it’s the stairwell. Lots of interesting sounds and background sounds here, again a very claustrophobic atmosphere.

The third disk is titled Delusional architecture. It starts out with the second of the entry level tracks. Again made up of snippets and manipulations from other track from Babel. The first main track is Dark scenery court games. Another highlight of the set, it’s chiming rhythms and gorgeous symphonic aura are a joy to behold. And although it also descends into crazed processing gymnastics the overall sound of the track is more refined. The dressing room is another environment piece, with saxophone the main instrument involved. Vertical fissures in stone is without doubt Babel’s most deranged moment. Recorded for a one woman show which Doyle did the music for it features quite manic vocals from one Olwen Fouere who’s mad delivery, use and misuse of language is quite something. The music is very oppressive and tense and fit’s the vocals well. The occasional distortion and cut-ups of the live vocals are a nice touch too. Mall fountain includes Olwen Fouere in slightly more refined mode, singing softly in the background of one of Babel’s more unsettling pieces. The fountain has a very dark atmosphere and tension that is intriguing. What horror occurred in this space why such a atmosphere of terror and suspense. It’s these sorts of unanswered questions that make Babel all the more interesting. Like those parts of cities that we know not to go to at night, although we don’t quite know why.

Johnny’s body at 002 comes in two parts, both are part cabaret fantastic and part performance art. Again Olwen Fouere lends her manic tones to the proceedings, more in the deranged Vertical fissures in stone style. The final track of the disk is Mr Foleys final moments. A subtle and evolving piece using some exceptional dry electronic textures and music concrete stylings. A distinct otherworldly feel about this track hinting at the dark forces in the tower and the last few minutes of Mr Foley.

Now we come to the two KBBL radio Cds. These are the icing on the cake in terms of Babel’s brilliance. The preceding three disks were largely devoid of human activity and sound tracked an alien and otherwise empty environment. What these KBBL disks do is to add a human touch, to flesh out the atmosphere with real people and events. The disks are divided into four shows, each with their own identity and particular theme. The first being the morning show, which is as with many morning shows around the world fairly frenetic and excitable. Containing weather and travel reports and upbeat music to start the day. The show is hosted by one Big Bob Umbrae a rather cheesy American style presenter but one in the tradition of the over the top non stop breakfast show. Standout tracks include You must be in and Nanda in the bar, both which include vocals from the lovely Elena Lopez. The music is a lot more accessible than the stuff on the first three disks. There’s also a large amount of humour in the presentation of the show. The high speed commercial break which includes three ads in six seconds.

The second show is Surface du Monde which is the world music show. Presented by a very suave sounding French chap and including music by Navigation and a track titled Lettuce in my hair, well watered. The music is quite laid back and classy, tribal sounding beats and ethnic rhythms coupled with the occasional foreign language vocal. Very nice stuff. At the end of the disk is a 16 minute track titled Trapeze in full moon. This is apparently meant to be a circus. The music is quite carnivalesk and jolly and brings up images of painted clowns and trapeze artists. It’s all quite twee really.

The second disk is for me the best of the two, with the Leisure Pursuits show and the night show. A lot darker than the previous disk some of the Babel themes surface during this mesmerising eighty minutes. Bladerunner being one of them, the phone numbers all start with 555 like in the film. There’s a lot of eastern vibes throughout the radio shows as in the crazed market place in the futuristic LA of the film. The Leisure Pursuits also contains some really beautiful music that really could stand on it’s own without the radio show format. Alle Rouste with gorgeous vocals from an unknown female is a smoky electronic jazz workout with a smultzy saxophone solo at it’s climax. Smoooove!!!. Sir Geoffrey is another piano led masterpiece sitting like an island of tranquillity in Babel’s sea of chaos. There’s some very otherworldly moments in this show, the links between the tracks are at times quite disturbing. TX Ffemme’s evocations of unity and the floating disembodied voices that pass through the ether are just two examples of this shows distinctly third place vibe. The DJ Myra Davies is as sultry a presenter as you could imagine, very very sexy voice. In all this is probably the best section of the whole Babel set.

Finally we have the night show presented by Ish K Babble a deep voiced slightly sinister voice presenting mostly ambient based music to get you though the night. Another track featuring Elena Lopez begins the show followed by Some flooded plain and Blue line to wonderland the later of which features samples of sounds and situations found on the Towers busy transport network. This show includes two adverts for the Soma pharmaceutical, a drug which can send you to sleep. This doesn’t sound so bad until the phone in shows the tower and the radio in another light. A man rings in trying to get the show turned off because he can’t sleep. It would seem the radio is piped into every home weather you want it on or not. The only way to escape it is to take the company sponsored sleep drug. A situation echoing a 1984 style big brother culture. The final track of the set is sleep, a simple ambient track with a slow processed voice chanting sleep over and over again.

So there you have it, Babel a multi dimensional masterpiece of quite remarkable vision and complexity. It’s certainly a challenging work and at over six hours in length will take you quite some time to get through let alone get into. But if you have the patience and the imagination Roger Doyle can lead you into a strange new world where both endless opportunity and unknown terror lurk.